Skip to content
This article is the fifth and last of a serie of five about how to code a one-pixel sine scroll on Amiga, an effect commonly used by coders of demos and other cracktros. For example, in this cracktro by Angels: 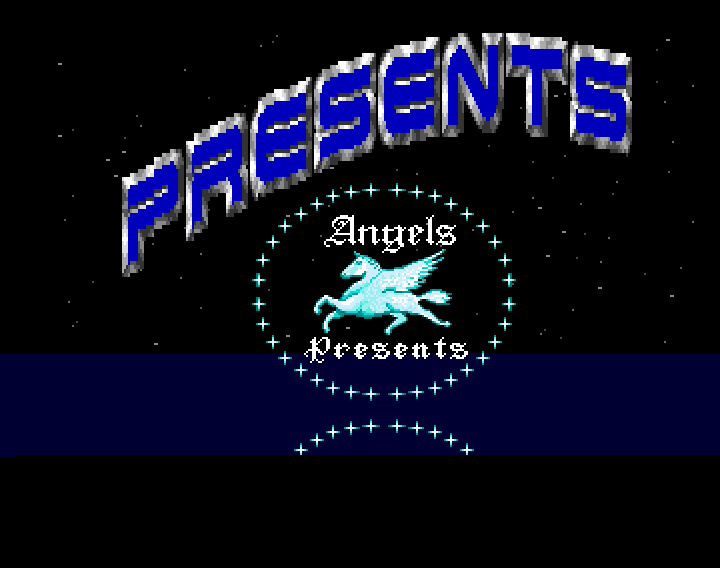 In the first article, we learned how to install a development environment on an Amiga emulated with WinUAE, and how to code a basic Copper list to display something on the screen. In the second article, we learned how to set up a 16×16 font to display the columns of pixels of its characters, and to use triple buffering to display the pictures on the screen without any flickering. In the third article, we learned how to draw and animate the sine scroll, first with the CPU then with the Blitter. In the fourth article learned how to add some bells and whistles to the sine scroll with the help of the Copper, namely a shadow and a mirror.
In this fifth and last article, we shall optimize the code so that the main loop runs at the frame rate of 1/50th of second. We shall also protect the code against the assaults of lamers trying to hack the text. Finally, we shall wonder what may be learned today from such a coding session on the Amiga.
Click here to download the archive of the source and data of the program hereby explained.
If you’re using Notepad++, click here to download and enhanced version of the UDL 68K Assembly (v3).
NB : This article may be best read while listening to the great module composed by Nuke / Anarchy for the diskmag part of Stolen Data #7, but this is just a matter of personal taste…
Cliquez ici pour lire cet article en français.
10/27/2018 update: A new section has been added after I discovered that the “Cycle-exact” option had not been activated in WinUAE.

Precompute to run at the frame rate 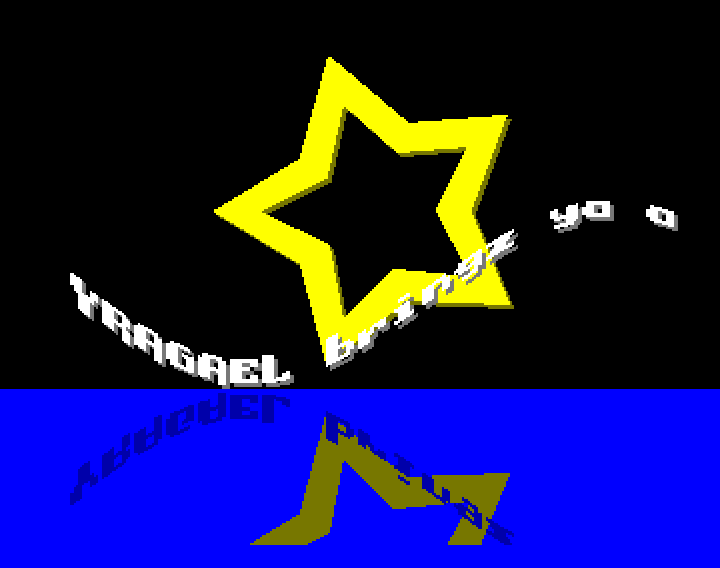 The main loop now takes 219 lines on Amiga 500 and 103 lines on Amiga 1200, without any optimization – in paticular, the whole bitplane that contains the star is filled with the Blitter, although it is useless to fill the horizontal strips before and after the star in this bitplane. We could easily stretch the sine scroll vertically by playing on the modulos with the Copper, add a starfield made of sprites that the Copper would repeat, add a beautiful module composed by Monty, and so on. But that’s another story…

A lamer may rip our sine scroll! He may use an hexadecimal editor to hack the text that scrolls. To protect ourselves from this lamer, let’s add some basic protection that will make him pay for it in case he attempts an assault.
First, we must encode the text so that it is not visible. We just use XOR to combine the bytes of the characters with some fixed byte value TEXT_XOR. This way, the characters won’t show up in a hexadecimal editor.
If the lamer were to guess how this works – and we shall let him guess it by exposing the encoding text to an attack based on the search of recurrences – we compute TEXT_CHECKSUM, a checksum of the encoded text, and add here and there some calls to a code that checks if the text has been modified. This code computes the checksum of the text and replace the text with “You are a LAMER!” (checksum TEXT_CHECKSUM_LAMER) if the computed checksum does not match any of the checksums of our original texts: 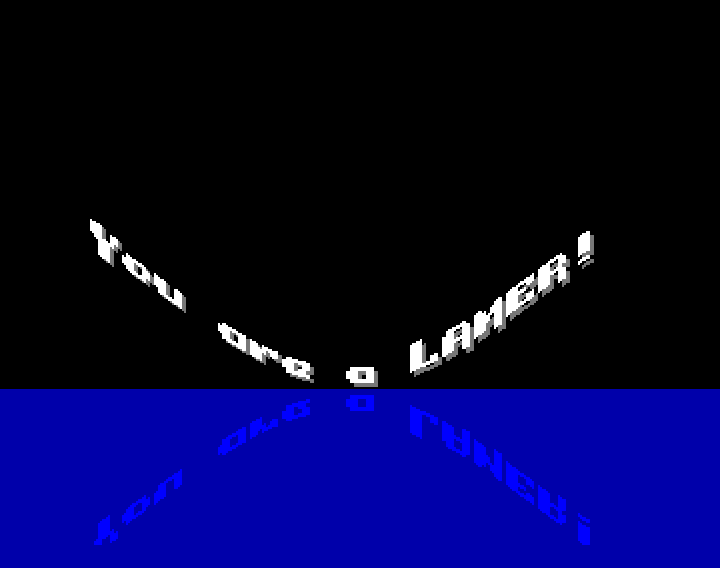 We do not factorize this code, but we copy it so that it is executed at various places during the demo. This way, the lamer won’t be able to get rid of it by simply replacing the first instruction of a subroutine with a RTS.
A very easter egg.

Coding the MC68000 in assembly language is demanding. Memorizing the values stored in the great number of avaiable registers and trying to use them instead of variables to avoid memory reads and writes makes the developper stack and unstack them in its own memory as he is writing the code. As well as I remember, who codes a 80×86 in assembly language does not face this workload, because the number of registers and their possible usages are so limited that pushing and pulling from the stack can’t be avoided. And it is far more easy to remember the contents of this stack than the contents of 13 registers.
I didn’t expect to code again on the Amiga. Some times ago, I came up with the idea to write articles about how to code a cracktro (here and there). For this purpose, I had to read some code I had written a long time ago, and to refer to the Amiga Hardware Reference Manual. That’s when I remembered that I never had study in depth the way the Blitter draws line. I knew this feature had been used by coders to draw sine scrolls. Finally, I gave it a try and I coded this sine scroll from scratch.
Browsing this manual and those of the MC68000, I realized that my knowledge of the hardware and the CPU was very superficial in those times. Should there be a lesson to learn from this, I would say that anytime you get interested in a technology, you should bother to read in details the whole documentation for this technology instead of relaying on its intuition, out of sloth.
Because relying on your intuition may lead you tu miss some important functionalities, and not understand well others. For example:
At first, it seems that this instruction tests the bit 14 of the word at the address $DFF002. In fact, reading the description of BTST in the M68000 Family Programmer’s User Manual reveals that if the first operand is N and the second is an address, the tested bit is bit N%8 (ie: N modulo 8) of the byte at this address. So, this is bit 14%8=6 of the byte at the address $DFF002 that is tested. This matches the bit 14 of the most significant byte of the word at this address, so our intuition did not betray us. Or was it luck? Making assumptions about the way instructions do work may lead to errors very difficult to correct because we are far from guessing what they are.
So, it should be considered mandatory to read the documentation of a technology to masterize this technology. By documentation, I mean the reference manual, not a popularized version. The authors who popularize documentation often treat it loosely, using shortcuts that lead to a dead end, misleading talent and flattering mediocrity. A popularized version of a reference manual should be considered as nothing more than an entry point for reading this manual. That said, it should be remarked that nowadays, reference manual are far from being as well written than the Amiga Hardware Reference Manual!
That shall be all for this time, and probably for ever regarding the coding of the Amiga hardware in assembly language – which I hadn’t practice since almost a quarter of century. Those article are dedicated to an old pal, Stormtrooper, without whose help I never would have got interested in coding the hardware of the Amiga in those times, and to the ones whose scene names scroll in the greetings that you shall read by the end of the sine scroll, if you prove brave enough to assemble and run the code. “Amiga rulez!”